The Rise In Pedestrian Fatalities Is Shocking.

As a father with a young daughter, and someone who enjoys walking around our office and neighborhood, it is shocking to read about the rise of pedestrian accidents leading to fatalities here on Oahu. The Department of Transportation reports that Oahu has gone from 3 recorded deaths from January to September 2017, to 19 pedestrian-related fatalities for the same period in 2018. This 525% increase is disheartening to say the least. There are some reports, primarily in the news, that fault lies in part to people crossing the street where there is no crosswalk. However, make no mistake, drivers should always be vigilant even where no crosswalks are present.  Also, but for the two that occurred this past Tuesday, they all happened at night. 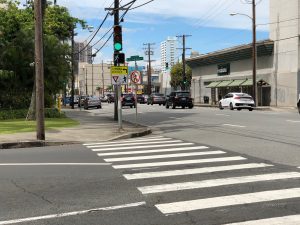 I walk around the office on S. Beretania to grab a bite and sometimes even I can’t help but feel anxious about crossing the street.

Is Enforcement The Answer?

Is there something that we can do to address this problem on the systemic level? The Honolulu Police Department recently issued a mandate to increase enforcement for both pedestrians and drivers.  However, the question remains, is it really an enforcement issue? As highlighted above, sometimes it is not solely the driver’s fault, but what about other facts? Does the government need to rethink the  streetlights and road markings?

An important part of my job is to ask questions. I spend a lot of time reviewing the facts of our personal injury  cases. I often focus on how my client came to their injures.  If there is a trend in similar cases, I begin to wonder what environmental commonalities are present, and if there is something that can be done. When this logic is applied to societal problems, such as a dramatic rise in pedestrian accidents, there may be outlier problems, but there are always underlying root causes. in the end, enforcement is part of the resolution, but this prompts the question of why is it happening, and at such an increase year-to-year?

Send Me Your Thoughts And Stories.

What do you think is going on? Let me know your thoughts and stories. I bet some of you have had some close calls, and I would like hear from you. Soon, I plan to compile the information and send a letter to the City and County of Oahu and the State Legislature to consider commissioning a study to take a look at this issue, particularly if the trend continues. You can email me at trejur@hewbordenave.com.

Update to this post, KHON2 reports (10/5/2018): HPD cracks down on violators to prevent more deaths on the roads

Update to this post, in the Star Advertiser (10/10/2018): Pedestrian Hit By Truck On Pali Highway Dies From Injuries, which is just one day after a similar report of 2 different pedestrian hit-and-run accidents, resulting in the tragic death of one.

The 7 measures are specifically as follows:

You can also find a copy of Mayor Caldwell’s announcement of the 7-point package “Look All Ways” on the City and County’s website here.  I want to hear your thoughts and comments, so please feel free to email me at Trejur@hewbordenave.com!

STAY SAFE EVERYONE AND LOOK ALL WAYS!

Ryan Responds: What’s the Difference Between a Trade Name and Tradema...