Did You Know How to Respond to the Missile Threat?

We are glad that everyone is safe and that the emergency alert about a ballistic missile threat to Hawaii on January 13, 2018, which people received on their mobile devices and saw flash across their tv screens was just a mistake. However, seeing social media reactions as the situation unfolded it seems apparent we all could be better prepared. We hope that we never have to act on disaster plans, but wherever you live you could always take better steps to safeguard yourself, your family and friends, and your businesses and organizations.

Do you know what to do if you see this on your mobile device or tv?

I was fortunate enough to attend a Hawaii Society of Business Professional’s luncheon last fall that covered the topic of the threat from North Korea and what people and businesses should do to prepare. So I felt a little better prepared compared to the confusion I saw on social media this morning. However, faced with the reality I did ask myself, did I take all t he precautions I could?  Maybe, but also maybe not. While we should ask questions of our officials about how a mistake like this happened, this presents us all an opportunity. An opportunity for us to better prepare for emergencies.

To that end I would like to direct your attention to the State of Hawaii’s Emergency Management Agency’s website. On it you will find a Get Ready section that has resources to help you prepare your family, your home, and your business. Those are resources for you to review in general for getting prepared for disaster in general. If you have concerns about the Nuclear Threat, the agency has a specific section dedicated to that here. Further, there is a FAQ and if you still have questions you can submit them to the agency for review and response. 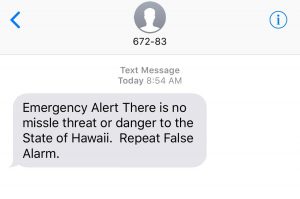 Thank goodness there was no actual threat. However, it may be an opportunity to be prepared for disasters.

Additionally, Hawaii State Department of Defense and the Hawaii Emergency Management Agency provided a Guidance Summary for Coordinated Public Messaging that gives critical information for the Immediate Actions you should take in case of a nuclear detonation. 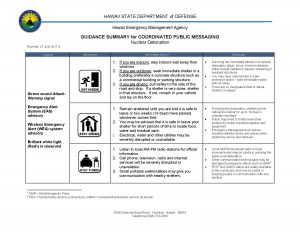 As you go through some of the resources, you will realize while there are a lot of practical steps, such as putting together an emergency kit by getting food, water, and medical supplies, a lot of planning is asking questions. Planning is that, whether it be strategic business planning or estate planning, we need to ask a lot of questions to get us to think of what we should do in a particular situation. Disaster planning is not any different: Do you have everything that you need for an emergency? Does everyone in your family know what to do in emergency? What if you are at home? What if you are at work?  And so forth …

On the one hand, we spend a lot of time planning for risk mitigation with clients, so we get it. It is sometimes hard putting in that mental time for thinking about the future. However, our firm’s other services include being a resource for clients and their businesses in going after claims for their injuries they’ve suffered in a disaster or asking for a release of obligation under a contract under a Force Majuere (Act of God) clause the reality is that work comes after. Bottom line is that your goal should be to keep yourself, family, business and community safe. So please consider steps to plan and prepare. Stay safe!

DISCLAIMER: This post provides general information, but does not constitute legal advice in any respect.  No reader should act or refrain from acting based on information contained in the post without seeking the advice of  an attorney in the relevant jurisdiction.  Hew & Bordenave, LLLP expressly disclaims all liability in respect to any actions taken or not taken based on the contents of this post.

So last week I discussed the “Clickwrap” type of agreement, heavily favored by online retailers, app makers, and video game console giants. Remember, in general, I mentioned that these agreements are known as adhesion contracts or the take-it-or-leave-it contact. In these agreements the party that drafted the agreement has much more power and many times courts will peruse these contracts in consumer situations due to the imbalance of power.
However, today I will be turning to a higher power and given all the wind and rain here in the islands of the past week I though it would be appropriate to discuss act of God or force majeure (which means “greater force”) clauses.

Example Situation of When this Clause is Applicable

To give this clause a better context, consider you have opened shop and promised to deliver 1,000 menehune widgets to a mainland company in exactly 1 months time. However, it is hurricane season and two weeks from when the agreement was made your factory has rain and wind damage and you will be unable to fulfill the order. The mainland company was depending on that shipment to make their product for an event, the result is they lose out on sales.

If there is a force of majeure clause it would excuse performance under the agreement under these circumstances. Basically, it is clear that performance is impractical under the situation due to the hurricane.  No amount of due diligence and/or care could have avoided the disaster and the party would have been able to accomplish the task nude the contract. It is clear that a hurricane is not under the control of person, thus it is an act of God or a force of nature. However, this clause is not only limited to purely natural disasters, but can include ones induced by human action, such as drilling and excavation that causes landslides or the changing of the land so there is a flood.

In general force majeure clauses cover three kinds of scenarios. One of them being the natural disasters, as just discussed. However, human events, such as riots, wars, or major societal upheavals are also covered. Consider, that a lot of things are produced overseas and the location of the factories. Here it is good to understand supply chain management on the business end, and then really think how an act of God clause is sometimes a necessity for a contracting party.

The third situation are those man-made technical problems. No, I am not talking about the blue screen of death on your PC, but rather more severe performance failures where the contracting party has no control. Things like the telephone service going out due to the telephone company, labor strikes (not due to the contracting party),  and government restrictions and regulations. The main thing is that similar to the other situations, these technical and performance issues arise not out of the party’s control, but someone else’s. Thus, simple computer failures and software glitches are not covered, but may be a systematic power outage or server-wide failure might.

The main thing to take away is that in these situations an act of God clause will excuse the party that fails to deliver or is delayed because of these kinds of scenarios, but the clause does not cover failures when it is due to the party’s financial condition or its own negligence.

Force Majeure Event ” means any cause(s) which render(s) a Party wholly or partly unable to perform its obligations under this Agreement (other than obligations to make payments when due), and which are neither reasonably within the control of such Party nor the result of the fault or negligence of such Party, and which occur despite all reasonable attempts to avoid, mitigate or remedy, and shall include acts of God, war, riots, civil insurrections, cyclones, hurricanes, floods, fires, explosions, earthquakes, lightning, storms, chemical contamination, epidemics or plagues, acts or campaigns of terrorism or sabotage, blockades, embargoes, accidents or interruptions to transportation, trade restrictions, acts of any Governmental Authority after the date of this Agreement, strikes and other labor difficulties, and other events or circumstances beyond the reasonable control of such Party.

While, I do not necessarily agree with this example (as it starts looking like a disaster movie as people who get carried away throw everything in) it does give you the flavor of what a force majeure clause is trying to accomplish within an agreement. Anyway, if you enjoyed this post or any of my others please “Subscribe” to this blawg!